Role of elevation, soils and fragmentation as selective agents. Science of selection in a restoration context

The study of genetic divergence along a landscape of selective gradients is fundamental to understanding adaptive evolution in the context of global change (Endler 1977, Storfer 1999). There is an immense body of global change literature indicating that habitat fragmentation is the second leading cause of biodiversity loss, however, understanding the evolutionary consequences of fragmentation has received relatively little attention (Sutherland et al. 2013). 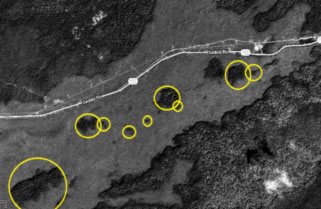 This is important because a consequence of climate change in terrestrial ecosystems is fragmentation of once-intact species distributions and host range shifts (Hampe and Petit 2005, National Climate Assessment 2013) which will likely alter gene flow and population genetic structure. Moreover, the evolutionary consequences of fragmentation will not occur in isolation but as a part of a greater landscape of selective agents driving evolutionary dynamics simultaneously. We are utilizing a system of tropical forest fragments that were naturally isolated by known lava flows in Hawai’i over the last 200 years to investigate whether contemporary selective pressures exerted by forest fragment size and edaphic conditions have exerted selective pressures that drive sympatric genetic divergence in functional plant traits. Specifically we hypothesize that: 1) Functional plant traits have diverged along both soil age and forest fragment size gradients; and 2) Plant-soil feedbacks have driven local adaptation by reinforcing genetic divergence in plant functional traits. Cuttings from the edge and interior of kipuka across a range of sizes were collected in 2012 and were grown in the IPIF greenhouse in Hilo for two years.

A restoration common garden from these cuttings was planted in 2014 in the Laupahoehoe region on the Big Island to address hypotheses regarding the role of fragmentation and soil substrate as selective gradients on plant functional traits and their community and ecosystem consequences. Nearly 800 trees were planted and they are yielding great data and fantastic educational and outreach opportunities for local schools and groups on this culturally important tree species (including the Laupahoehoe School District, Youth Conservation Corp, Kapu).

The Schweitzer lab works at the most interesting place in ecology and evolution – the interface between above- and belowground processes in terrestrial ecosystems. We aim to be at the forefront of research in biodiversity studies emphasizing quantitative, experimental, and multidisciplinary approaches to fundamental ecological and evolutionary questions.